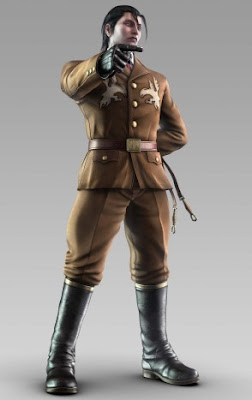 Sergei Dragunov (born February 3, 1981) is a fictional character in the Tekken fighting game series. He is one of the two characters that first appeared in Tekken 5: Dark Resurrection, along with Lili. He employs brutal grabs, vicious non-escapable counters, and CQC techniques, based on Russian Sambo. Although a newcomer on Tekken, he is mostly well known for his quick grabs, counters, and the great deal of variety of attacks being shifted into grabs, as well as being the prominent military figure in the Tekken cast. With the exception of various grunts and kiais during fights, Dragunov does not speak, although he does make little sounds whenever he gets hit. His mission was to capture Devil Jin and Jinpachi Mishima. 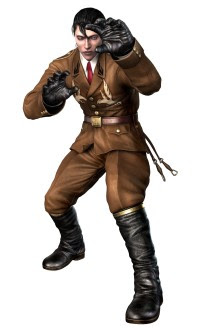 Sergei Dragunov appears in the live-action film Tekken portrayed by Anton Kasabov. Like in the games, he is mute. He participates in the Iron Fist tournament, using a spear as his weapon to face Bryan Fury in the semifinal match. However, he is killed when Bryan Fury chokes him with a steel chain and dislocates his neck bones.
His last name probably comes from the Russian SVD Dragunov sniper rifle,which possibly attributed for his cold-hearted demeanor and precision in combat.
His fighting style seems to be based on Sambo, a form of martial arts developed in the Soviet Union.
Posted by bluedreamer27 at 2:31 AM