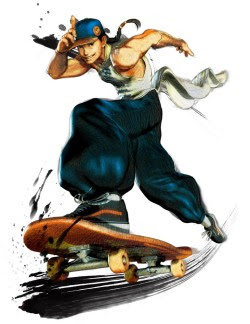 Yun has long, brown hair that is braided into a pony tail which is covered by a blue baseball cap with a yellow visor and a circle with a skateboard in it. He sports a sleeveless, white kung fu shirt with a yellow hem and blue trim and buttons. On his arms, yellow wristbands that continue to form fingerless gloves, and black pants and sneakers. Yun is seen riding on his skateboard when not fighting.
Posted by bluedreamer27 at 12:35 PM