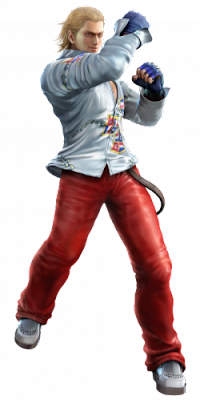 Steve Fox (born March 21, 1986) is a fictional young English boxer in the Tekken fighting game series. He made his first appearance in Tekken 4 and was originally given the name "Dean Earwicker" before the game's arcade release. Having no memory of his past, Steve does not know the identity of his biological father or the origin of the scar on his arm. He is the son of Nina Williams.
Steve Fox, an Oxford University Graduate, was an incredible fighter in the ring. However, his expertise caused fear within the Mafia, who told him to lose a fight on purpose for money. Steve did not obey, and instead, won the fight. This resulted in Steve being pursued by the mafia who were eager to kill him. Steve left the country, flying to America, but came to the wise conclusion that no mattter where he was, he would be found and killed. Steve enters the The King of Iron Fist Tournament 4 in hopes of finding out more information behind the unusual scar he bore on his arm.

Steve Fox appeared in the live-action Tekken movie in spring 2010, played by British actor Luke Goss, despite the huge age difference between them. In contrast to the video game character, this version of Steve is an older, retired fighter with no blood relation to Nina. He appears with a shorter close shaved hair style and dresses in a leather biker bomber jacket with a grey low circular cut vest underneath, he also wears dark jeans and a string necklace with a pendant. He still talks with an English accent often swearing by calling people wankers (his accent and mannerisms close to that of a "typical"north-londoners today).
Posted by bluedreamer27 at 2:34 AM