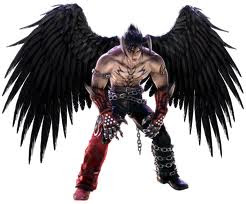 Devil Jin (born April 23, 1986) is a character who made his first appearance as a fully playable character in Tekken 5. This page is about the alternate reality character, not Jin's Devil Hybrid Form. He is the result of Jin destroying his Angel side and fully merging with Devil like his father Kazuya. He is the sub-boss for every character in Tekken 5 and Tekken 5: Dark Resurrection with the exception of himself, Jin Kazama, Heihachi Mishima, Kazuya Mishima, Asuka Kazama, Hwoarang, Raven, Wang Jinrei and Pecho. 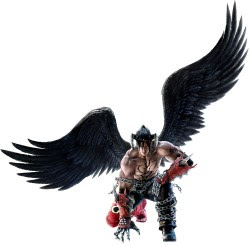 Jin inherited Devil from his father and Angel from his mother. Following the second King Of Iron Fist Tournament, the part of Devil that had fled from Kazuya Mishima attempted to inhabit the body of his unborn child Jin Kazama but failed. Jin's mother Jun Kazama fought this part of Devil off but it returned fifteen year later after her demise when it branded the now teenage Jin with a mark on his left arm, possesing him. During the climax of the third King Of Iron Fist Tournament Jin was shot in the head by his grandfather Heihachi. Revived by the Devil Gene within him, Jin reawakened as Devil Jin and made quick work of Heihachi and the guards that accompanied him. In the end of Tekken 4 Kazuya destroys his Angel and fully merges with Devil. This character is the result of Jin had he done the same as his father.
Posted by bluedreamer27 at 2:24 AM