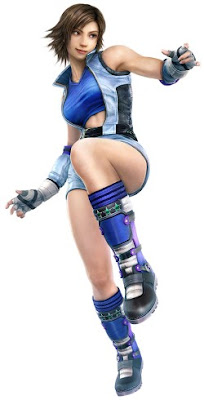 Asuka Kazama (born August 31, 1990) was introduced in Tekken 5. She is more famously known as the cousin of the series' protagonist, Jin Kazama. Not surprisingly, since Asuka and Jin have the same surname, it is known, through an official statement made by Namco, that they are cousins.
Asuka's official story states that she was taught Kazama-style Traditional Martial Arts by her father, a dojo-master near Osaka, ever since she was young. By nature, Asuka believes very strongly in justice and devotes much of her free time to being a vigilante of sorts, breaking up fights nearby (also, she is seen saving a kitten during the Tekken 5 console opening). At the time in which the game takes place, Asuka is seventeen years old and is a high school student. Asuka returned home from school one day to find that her dojo was in shambles. The students there had been beaten severely and her father was so badly hurt that he had to be taken to the hospital. In the next several days, a detective from Hong Kong, Lei Wulong, came to her and explained that the culprit would likely be entering The King of Iron Fist Tournament 5. In order to get her personal revenge and redeem her dojo, Asuka enters the tournament as well. During the King of Iron Fist Tournament 5, Asuka finds out that Feng Wei is responsible for the damage to the dojo. Asuka fails to find Feng, and after the tournament is over, Lei returns to Hong Kong and things are once again back to normal. 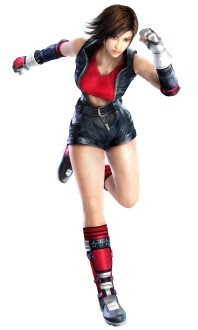 Asuka entered The King of Iron Fist Tournament 5 in order to avenge her father, who was injured by Feng Wei. She was unable to find Feng Wei, and, as the tournament ended, she returned to her calm and normal life.

However, her life didn't stay peaceful for long, as Asuka discovered that Jin Kazama, her cousin, was the man responsible for the terrible war going on all over the world. She enters The King of Iron Fist Tournament 6 in order to capture him.