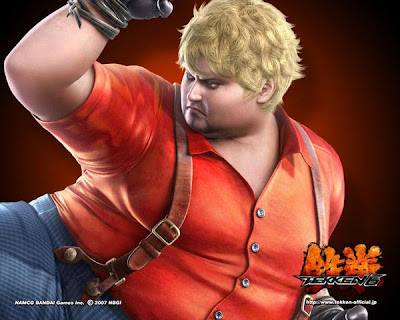 Bob, full name Robert Richards, is known as a genius of martial arts
After winning the tournament, Bob became a worldwide sensation. His schedule was filled with TV and magazine interviews, with his training secrets becoming unearthed. After cameras take multiple photos, a poster of his obese self appears on the wall, with a blurry image of Bob walking by. He weighs himself in his exercise room, where he discovers he only weighs a shocking 150 lbs on a scale. He steps off, wondering if it was just an illusion, then weighs himself again. After looking at the number once more, he says the following: "It can't be right... How can I only be 150 lbs!?" The camera then shows Bob, wearing heavy clothing covering a skinnier and slimmer body, and he screams in horror, accepting the fact that all of his famous weight vanished. He then proceeds to bang his head on the wall, only to be found in the middle of floor passed out. 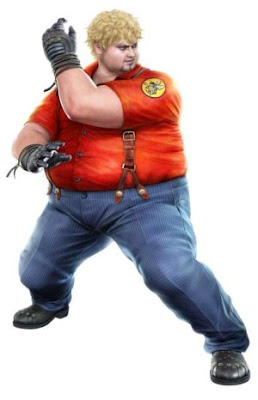 Bob is described as "a freestyle karate practitioner from the U.S" by Tekken 6 developer and executive producer Katsuhiro Harada. Bob is similar to Hong Kong action cinema superstar Sammo Hung Kam-Bo. Both are obese, but extremely fast and acrobatic despite their size. Bob's attire is similar to the Fatal Fury 2 character, Cheng Sinzan. Both sport a collar shirt and trousers with suspenders.
Posted by bluedreamer27 at 6:55 PM