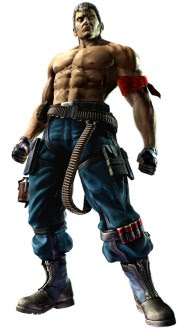 Bryan Fury (born April 27, 1973) is a video character from the Tekken series. Dr. Abel 'created' him after he was killed, installing cybernetic enhancements to resurrect him. These enhancements resulted in extreme power, inhuman durability, extremelly high agility, superhuman stamina, amazing speed and many moves. It appears however. Once a rogue police officer and kickboxer, Bryan rivaled Lei Wulong. After being attacked simultaneously by two gangs, Bryan died, and was subsequently reanimated by scientist Dr. Abel. Infusing him with cybernetic enhancements, Abel reanimated him as a cyborg, intending to use him to kill both Yoshimitsu and Doctor Boskonovitch, Abel's rival. Even after Abel transformed Bryan into a cyborg, he still retained all of his prior memories.

Bryan Fury appears in the live-action film Tekken as a secondary antagonist, portrayed by British actor and kickboxer Gary Daniels. As in the games, he is a human turned cyborg, and fights for the Mishima Zaibatsu (here named "Tekken"). Kazuya blackmails him into fighting in the Iron Fist Tournament so as to eliminate Jin Kazama. Bryan, fearing the exposure of his illegal bionic implants, complies. He fights and kills Sergei Dragunov with relative ease, and then faces Jin, whom he pummels until Jin discovers that his artificial joints are weak. Jin exploits this weakness and kills Bryan by twisting his neck.
Posted by bluedreamer27 at 11:46 AM