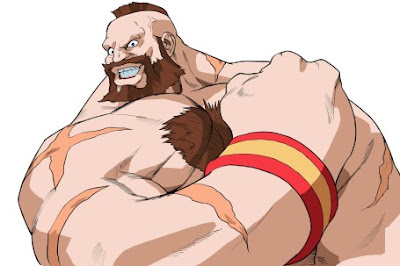 Zangief, also known as the "Red Cyclone" is a video game character created by Capcom. He is part of the Street Fighter series of fighting games, first starring in Street Fighter 2. His signature fighting style is close up and wrestler based, with devastating throws and powerful base moves. This makes him tough up close, though often has trouble with foes with projectiles. 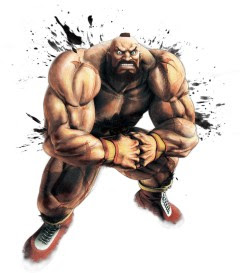 Zangief is a close-range character as he is a wrestling type. Many of his moves are more complicated to pull off due to the 360 motions input required to perform the moves, making him a character for advanced players. Zangief is one of the slowest of all characters in the Street Fighter games, and presents a large target, yet is widely considered high-tier as he has several means to bypass projectile attacks such as Spinning Lariat and Banishing Flat, the ability to walk unphased into a hit during his Flying Power Bomb, and the ability of his Spinning Piledriver to grab opponents out of most ground-based moves. 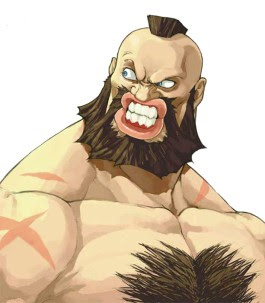 Zangief is similar to the original 1987 version of Birdie, as both characters are depicted as very large men with mohawk haircuts. Zangief is also similar in terms of build and fighting style to Mike Haggar from Final Fight, whose spinning clothesline move he emulates, not to mention that Zangief's alternate costume in Street Fighter IV is a nod to Mike Haggar's costume. There is a theory supported by Saturday Night Slam Masters on the Super Nintendo that Mike Haggar and Zangief know each other as former wrestling partners before Mike became the mayor of Metro City.
Posted by bluedreamer27 at 12:38 PM