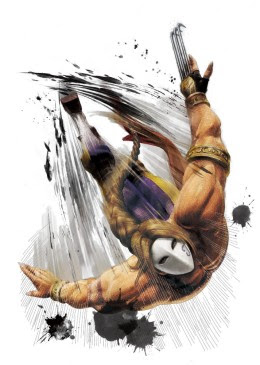 Vega, known as Balrog in Japan, is one of the bosses of the Street Fighter fighting game series. He first appeared as a boss character in Street Fighter II. He is a memorable character, not only for his obsession with beauty, but also for the claw he wields and his unique fighting style.

Vega uses his own fighting style of which is a blend of Spanish Ninjutsu and Bullfighting. 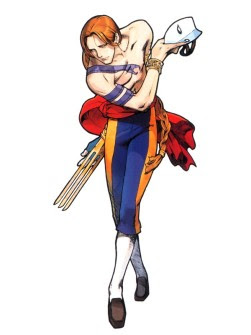 Early sketches suggest that Vega was going to resemble a medieval knight wearing a full suit of armor. This idea was scrapped because Street Fighter was about fighters from all over the world, not time. Remnants of this concept are apparent in Vega's final design including a mask and a sharp metal claw.

Vega is one of the few Street Fighter characters to constantly carry a weapon, and the only character to do so in Street Fighter II. This claw is useful for both stabbing and slashing attacks, and gives him a very long range compared to most characters. It is the same type of weapon worn by Geki in the original Street Fighter. Vega is one of the fastest characters in the Street Fighter series, but also one of the most delicate; his defensive rating is unusually low compared to most of the other characters, to balance his incredible speed. Vega's swiftness and flying special techniques make him well-suited for multi-hitting combination attacks, confusing cross-ups, or long range poking attacks with the reach-advantage provided by his claw. It takes exactly fourteen blocked hits for Vega to lose his claw. This reduces his attack range significantly, and prevents him from doing certain super attacks. Since Super Street Fighter II Turbo, Vega can pick up the claw. In Street Fighter Alpha 3, he can lose his mask as well, though the effect is only cosmetic. In SNK vs. Capcom: SVC Chaos, Vega cannot lose his claw. In the Street Fighter EX series, Vega may reinforce or recover his claw with a super move.