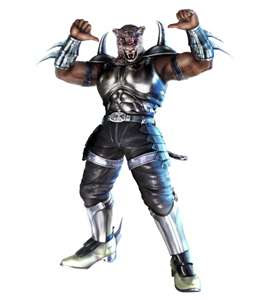 Armor King (born July 12, 1960) is a character introduced in the original Tekken. His identity has possibly been used by two different persons in the series. The original Armor King is the former mentor of Tekken's recurring character, King. For some time he was a rival to King, but eventually they became very close friends, with Armor King bringing King back from alcoholism in Tekken 2 to reclaim his glory and overcome his addiction. Armor King was killed (accidentally) later on in the Tekken canon by Craig Marduk in a fight. During the fifth tournament Armor King apparently returns. It would later be revealed through his ending in Tekken 6 that the renewed Armor King is in fact the brother of the original Armor King. Armor King the second (born December 22, 1969) just like King, does not audibly speak, but he does make growling noises that sound like a jaguar's growl. Armor King's audible growls are translated into speech, much like King's. 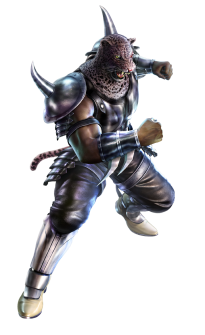 Armor King is a member of a Mexican tribe who carries around the Jaguar masks that both King and Armor King wear.The hidden name of armor king is the KO-KOT, which means 'proud friend' in the language of the Mexican tribe. After a fateful meeting, in which the original King was inducted into Armor King's tribe, Armor King challenged him to a battle of strength. While Armor King was clearly the superior fighter, the battle ended with King escaping. Armor King's eye was damaged during the fight, and he still bore the scar. However, near the beginning of the second tournament, the two set aside their differences and became great friends.
Posted by bluedreamer27 at 8:57 PM