Julia Chang (born May 13, 1987) is a character in the Tekken fighting game series. She is the adopted daughter of Michelle Chang, who is playable in Tekken 1, Tekken 2, and Tekken Tag Tournament.

Julia Chang fights for the preservation of the world's forests, and always joins The King of Iron Fist Tournament for the same reasons as her mother: to make the Earth a better place to live.

Julia studies archeology in Michelle Chang's tribal lands. As a baby, Julia was deserted in the ruins of ancient Native American settlements, where Michelle found her. Michelle rescued Julia and brought her up with love. Julia loved Michelle and her adopted tribe and trained with Michelle to protect her beloved homeland. 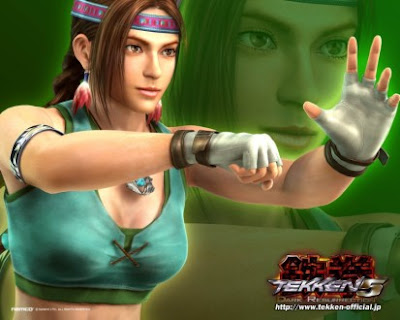 Waiting for her there was a prominent Arizona land owner, an old woman who claimed to have the ability to hear the voice of spirits. With the help of the old woman, the reforestation plans were on track to be realized. However, when Julia got up to leave, the old woman made an ominous prediction. "Jin Kazama and Kazuya Mishima must not be allowed to clash. If they confront each other, a source of great evil will be resurrected and unleashed on the Earth".

Julia was skeptical of the old lady's prediction. However, after hearing news that the Mishima Zaibatsu has sponsored The King of Iron Fist Tournament 6 on the flight home, the danger seemed much more imminent. Julia decided that she would join the tournament.
Posted by bluedreamer27 at 12:35 AM