Bruce Irvin is a character in the Tekken fighting game series. His appearance, mannerisms and fighting style have been based on Thai martial artist Tony Jaa since Tekken 6. Bruce Irvin is highly skilled in the art of Muay Thai. At an early age, Bruce lost his father, mother, and older brother, and he turned to fighting, eventually joining the police force and working alongside Lei Wulong. He was a respected American cop and a role model for children, as shown in his endings. When Bruce was sent to Japan to investigate Kazuya Mishima, the plane crashed and Bruce lost his memories. Kazuya found him and hired him as a bodyguard. At the second King of Iron Fist tournament , he found himself fighting his old partner Lei, who was sent to find him and arrest Kazuya. In the end, Bruce was defeated and escaped on another airplane which also exploded. 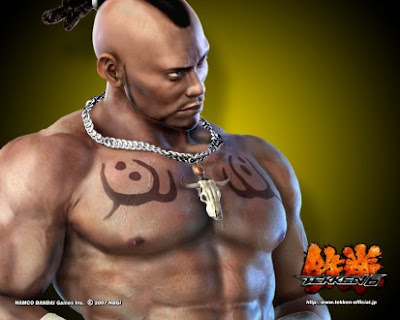 After becoming reacquainted with Kazuya Mishima at the King of Iron Fist Tournament 5, Bruce Irvin decided to assist Kazuya with his scheme to takeover G Corporation , and after they had succeeded Kazuya managed to control the corporation from behind closed doors. In Tekken 5 and 6, one of Bruce's victory animations directly imitates Tony Jaa's series of movements from "Ong-Bak The Muay Thai Warrior".
Posted by bluedreamer27 at 10:53 AM