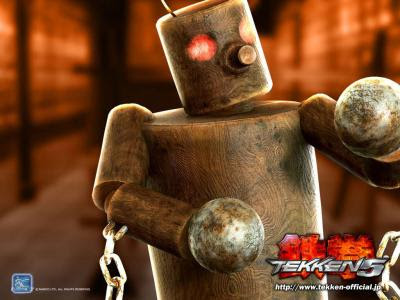 Mokujin (crafted February 16 A.D) meaning literally "wood person") is a character in the Tekken fighting game series inspired by the Jackie Chan movie Shaolin Chamber of Death. He is a wooden training dummy who comes to life at the presence of powerful evil. He has no fighting style of his own, and instead swaps between the fighting styles of the other characters. At the beginning of a fight, Mokujin will assume another character's fighting style at random. In this aspect, mastering Mokujin requires mastery of all the other Tekken characters' movesets.
Mokujin was crafted from a 2,000 year old tree and seemingly comes to life whenever an evil arises. 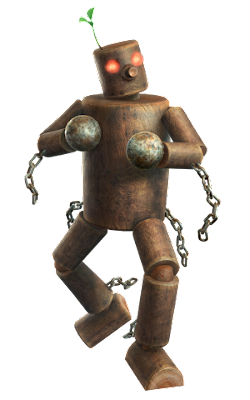 Tetsujin was also an alternate costume for Mokujin in this game. To pick Mokujin in Arcade mode, one must go all the way to the left on the bottom row, and Mokujin/Tetsujin will be in the invisible box to the left of Wang. Given that Ogre, Devil & Unknown are present in Tekken TAG, it is assumed that Mokujin arose again to stop them. Seeing as there are three evils to be stopped, this may explain why Tetsujin was also "activated".The setting of Mokujin's ending is Forrest Law's second stage, where Mokujin, the player won the game with is leading a traditional kung fu routine with at least 40 other Mokujin. He also appears in King's ending, where King beats him up.