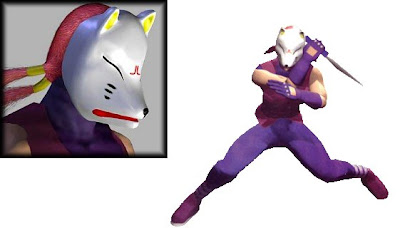 Kunimitsu (born March 20, 1958) is a character in the Tekken fighting game series. She made her first appearance in original Tekken as an unlockable character and sub-boss for Michelle Chang. It is unknown what happens to Kunimitsu after her last canonical appearance in Tekken 2. Some fans speculate that she was killed by Yoshimitsu towards the end of the second tournament. Ogre/True Ogre has some of her moves in Tekken 3 and Tekken Tag Tournament. This implies that she was attacked by Ogre.

Kunimitsu is known as "The Cat Devil". She was a former member of the Manji posse of ninja bandits led by Yoshimitsu. She lost her Japanese identity when she joined the group to maintain her anonymity. Upon joining, she was taught the skills of the stealth knife at the Manji ninja schools of "Jujutau". She stayed with the group for a few months, until a series of petty thefts from the band's funds led to her dismissal. At a loose end, she decided to train as a mechanic mending air conditioners. She entered the first King of Iron Fist Tournament intending to steal a Native American treasure from a young brave. Kunimitsu, fearing the wrath of the vengeful Michelle, went into hiding.
Posted by bluedreamer27 at 5:28 PM