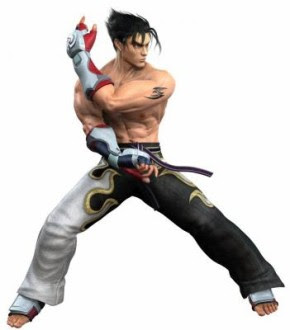 Jin Kazama (born April 23, 1986) is a fictional character in the Tekken series and the main hero throughout the series. He is one of the most recognizable characters in the series, being featured on the packaging for the console version of each sequel following his introduction in Tekken 3. Jin Kazama is the son of Jun Kazama and Kazuya Mishima. Kazuya and Jun crossed paths and became intimate. Jun found herself pregnant with Jin immediately afterwards. The Devil that possessed Kazuya attempted to enter Jin while he was still in his mother's womb, but Jun defeated it. Wishing to raise her son alone, Jun disappeared into a remote mountain location, where she raised Jin and trained him in her Kazama-style self-defense fighting style. He is considered the most recognizable character in the series along with his grandfather Heihachi Mishima and his father, Kazuya Mishima. He has also been featured on the packaging for the console version of each sequel following his debut.[3][4][5] In addition, each game in the series after his introduction has featured the result of Jin's endings as the primary focus of the plot, making him one of the most pivotal characters in the ongoing saga. In Gamest's 1997 Heroes Collection, Jin was voted as the staff's thirty-first favorite character. He shared the spot with three other characters, including Street Fighter characters, Charlie, and Yang. 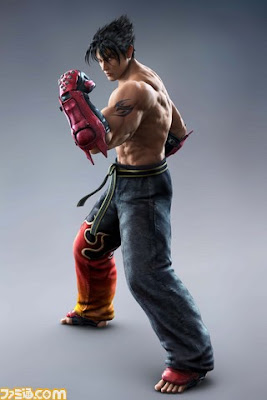 Jin is a young Japanese man with black hair which spikes up in a distinctive pattern. On his left arm, he bears a mark that was branded onto his skin by the Devil. His most recurring outfits usually comprise of a karate gi or jumpsuit—both with some sort of flame design (the color of which is varied throughout the series, and has been customizable since Tekken 5). While Jin's gi costume usually consists only of trousers, gauntlets and footpads, in Tekken 4, he also wore the jacket of the gi openly, exposing his torso. Tekken 4 also introduced Jin's hooded jumpsuit, which he kept until Tekken 6. Also, in both Tekken 3, and Tekken Tag Tournament, players can select a Mishima High School uniform for Jin to fight in. In Tekken 6, he wears a long black coat similar to the one that he wore in his ending in Tekken 5.
Jin's feud with his other Mishima family members and the inner turmoil caused by his "Devil Gene" are consistent topics throughout the series. This struggle has formed somewhat of a "tragic hero" role around the character, punctuated by his very name, Jin, which means "benevolence" in native Japanese.
Posted by bluedreamer27 at 3:34 PM