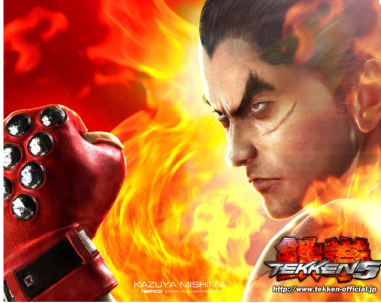 Kazuya Mishima (born December 11, 1958) is a fictional character in the Tekken fighting game series. Appearing originally as the main protagonist of the series, he would become much more of a villain in later games along with his demonic entity known as Devil.

His surname roughly translates to "Third Island". His given name means "one eight" in English. The name Kazuya is an anagram of the word Yakuza, which is the name of the Japanese mafia. Several of his customization options in Tekken 5 include Yakuza-styled attire. According to Namco's official backstory, Kazuya Mishima is the son of Heihachi Mishima, the long-time Chief Executive Officer of the Mishima Zaibatsu: a powerful worldwide conglomerate and its various subsidiaries. He is also the grandson of Jinpachi Mishima and father of Jin Kazama, having had a relationship with Jun Kazama. Adoptive brother of Lee Chaolan and Half-brother of Lars Alexandersson.

In the original entry to the Tekken franchise, Kazuya was considered to be the primary protagonist. And for all intents and purposes, there was no reason to believe differently. Kazuya was actually quite frail and timid as a boy and was the victim of years of abuse at the hands of Heihachi. Indeed, Kazuya originally entered the first King of Iron Fist Tournament in order to face off against his father, who was played up to be a corrupt corporate tyrant. Kazuya's clothing of choice, simple white pants and red gloves and footpads, even helped to draw parallels to another "mysterious loner" hero, Street Fighters Ryu. So most people (both within the game and in real life) simply wrote Kazuya off as the cliché fighting game hero.
Since his original appearance, Kazuya's character has gone through many transformations: From hero, to villain, to anti-hero and back again. Whatever was left of his good side appears to be totally suppressed by his Devil persona. Kazuya no longer fights against his darker side, and the two seem to have come to mutual terms, as Kazuya can call upon Devil whenever he likes now (such as in his Tekken 5 introduction). This makes him one of the more unique protagonists in fighting games and makes him quite popular amongst Tekken fans.
Posted by bluedreamer27 at 5:34 PM