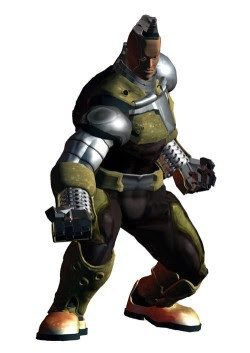 Jane, still haunted by memories of Jack-2's fate nineteen years later, works on a way to restore Jack-2. She learns that most of the technology responsible for Jack-2's A.I. was created by Mishima Heavy Industries, a subsidiary of the Mishima Zaibatsu. She also finds the ground work for something called "Project Gun Jack" (manufactured June 10, 2002), an upgraded Jack with the addition of a pivot gun. Jane snuck into Mishima Heavy Industries and secretly installed a hidden program. Dr. Abel tried to destroy this version of Jack by firing an electromagnetic burst from a satellite, but he ultimately failed due to Gun Jack's energy shield protecting himself and Jane.
At the third tournament's conclusion, Heihachi Mishima's Tekken Force attacked Jane. She was rescued by Gun Jack, who was destroyed by the onslaught of gunfire. Jane escaped with the help of G Corporation.