It seems that my dog Snoopy found his new buddies in the nature of these two new pets given to us by y neighbor and my uncle. Too bad Snoopy is not that Jolly dog that he used to before that's why my mom decided to grab this opportunity to ask for new puppies. 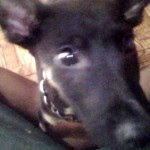 Meet Madel. This is my first time to have an All black dog. He was given to me by my Uncle Edward 2 weeks ago. He's not as aggressive as Snoopy during at his age and he's kinda quiet too. Sounds weird for a puppy but i guess i can bear with his attitude. Beside I prefer to have a quiet dog especially during the night! Wonder where do i get his name? We got the name "Madel" from one of the characters of a Koren Drama Series "Temptation of Wife". Mom is so addicted to this drama series so she decided to name it after her favorite character on the said series. Though the character Madel used to be the one that provides a comic relief on the story. The character used to be joker which is exactly the opposite of this puppy's attitude lol. 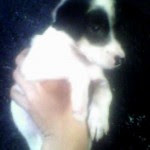 This is Thia. And yeah! Her name is taken from Thia Megia hahaha. It seems that we are so addicted to some tv programs and we thought of naming our puppies after our favorite tv shows. Well she's the exact opposite of Madel. She's very aggressive, noisy and playful which reminds me of the young snoopy. I just love this dog because you do not have to teach her where to poof. She will immediately go outside to poof and to pee. She was given to us by our neighbor after their dog gave birth for 6 lovely puppies.

Well, this is a big challenge for us now since we already have 6 pets at home. It is our responsibility to take care of these two. We should support what they needs like dog feeds, medicine and more. We should take them to a Vet on a regular basis. Does grooming part of the Vet services because i have heard that Vet Tacoma in Washington offer this kind of pet care service so i am wondering if the vet here in our country is doing the same thing.
Posted by bluedreamer27 at 4:42 PM