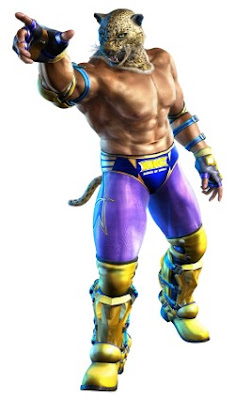 King (born April 1, 1975) is the name of two different characters in the Tekken fighting game series, both of whom fight in the style of luchadores from Mexico. Both versions of the character wear a jaguar mask that totally hides their heads in matches. The character was inspired by both legendary Japanese pro wrestler Tiger Mask, as well as Mexican wrestler Fray Tormenta, a Catholic priest who became a masked wrestler in order to support an orphanage. King does not speak, per se. Instead, he makes growls and snarls in the manner of a jaguar, which are translated into English subtitles at the bottom of the screen. Interestingly, other characters do not have a problem understanding King, and converse with him as though he was speaking naturally.

King (born April 1st, 1975 , died February 17, 2005) first used to be a ruthless street brawling orphan with no care in the world except fighting. In one of his fights, King was grievously wounded and collapsed in front of a monastery. The Marquez Priests saved him from death. After recovering, King realized the error of his ways and resolved to start a new life. He became a Catholic priest and renounced his old fighting ways. He then became a man with a mission; he dreamt of building an orphanage for street children, hoping to save them from becoming the kind of person he used to be.

King has one problem, however. He lacks the necessary funds to achieve his dream. King discovers The King of Iron Fist Tournament and hopes to win the prize money. King enters the tournament and manages to get third place, winning enough prize money for the orphanage. He also met his rival, Armor King.
Posted by bluedreamer27 at 5:16 PM