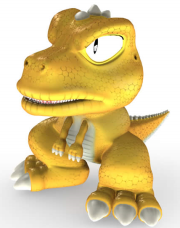 Gon is a licensed character appearing in Tekken 3. He is unlockable by defeating him in the Tekken Ball mode or by achieving a high score in Survival mode and inputing the name "GON". He is one of the two special hidden playable characters, along with Doctor Boskonovitch. It is unknown if Gon's appearance in Tekken 3 is canon or not. His appearance seems purely ornamental, considering no motive is given for him participating in the third King of Iron Fist Tournament. Gon's ending is the only ending in Tekken 3 that goes in a continuous loop. Gon's alternate costume for this game shows him with a turtle shell and blue gloves (The turtle shell being a reference to the time when Gon decided to wear a turtle shell that he found.). Gon is the only character in Tekken 3 who is barely affected by True Ogre's fire blast. It only does 1 damage point to Gon. He is one of the 6 characters from the Tekken series (Tekken, Tekken 2, Tekken 3 Tekken 4 Tekken 5 and Tekken 6 respectively) not to appear as a playable character in Tekken Tag Tournament and hasn't appeared in a Tekken game since Tekken 3 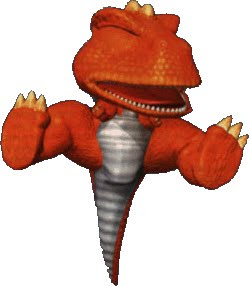 Gon is based off a manga created by Masashi Tanaka. Gon is a small dinosaur that bullies animals that are paleolithic.

Masashi Tanaka (Gon's creator) has said, "This work contains no dialog or onomatopoetic words. People always ask me why I have done this. From the beginning, I didn't think it was necessary. Manga should be without grammar. I also think that it is strange to give animals human language and make them talk. What I set out to do with Gon was to draw something that was more interesting than anything you could say in words. Manga still has great potential that does not exist in other media. I plan to continue developing the art of expression."

Gon's adventures are usually comedic with environmental connotations. There is very little continuity within the series, with Gon appearing in different countries and interacting with their respective fauna in almost every issue. He is often portrayed as being a short-tempered yet good-hearted creature, offering his help to the various animal friends he encounters in each issue.