Jun Kazama is a character from the Tekken Series who is currently labeled as missing. Jun was introduced in Tekken 2, and returned for Tekken Tag Tournament, even though this game is non-canonical. She is the mother of Jin Kazama. It was confirmed in the Tekken 6 storyline that she was attacked and killed by Ogre before Tekken 3, though many fans argue that this is only in Jin's perspective. Ogre has some of her moves, like her "Windmill Kick" move. Jin, seeking to avenge his mother, kills True Ogre in The King of Iron Fist Tournament 3. Jin now wants to get his second revenge by killing Ogre. Another interesting fact is that Jun seems to be completely replaced by a recent addition to the series named Asuka Kazama (cousin of Jin Kazama), both in terms of gameplay (they have the same moves, but Asuka has more moves than Jun). Asuka first appeared in Tekken 5. In previous Tekken games, Jun Kazama possessed strange angelic powers that allowed her to temporarily quell evil entities (such as the Devil which possessed Jin Kazama and, possibly, Kazuya Mishima). 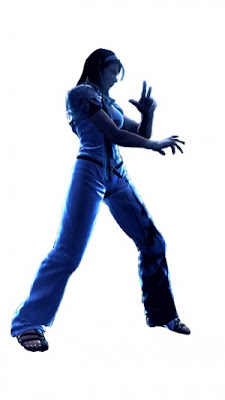 Jun is an officer of the WWWC, a wildlife protection organization. She is called "The Chosen One" by her Kazama relatives. She is highly psychic and can sense a mysterious power surrounding Kazuya Mishima. At the behest of her father's ghost, she sets out to free Kazuya, who smuggles environmentally-protected animals, and also wants to free him of his evil power during the tournament.
Jun Kazama appears in the Tekken Movie as one of the main sources around the film. Before the events of the movie Jun was once close with the professinal street boxer Steve Fox. Also what is known that she was raped by Kazuya and became pregnant with Jin (which Kazuya never found out about until Jin was a young adult). Jun raised and trained Jin the Kazama Arts of Fighting. She was very protective of him and was very angry that he wanted to enter the Tekken tournament. She tried to hide the truth about his Mishima blood by telling him that his father was dead. It also revealed that Jun was saved by Heihachi Mishima. Jun was killed by a bombing caused by Kazuya and the Jack Police Force. This is the reason why Jin enters the tournament.
Posted by bluedreamer27 at 5:11 PM