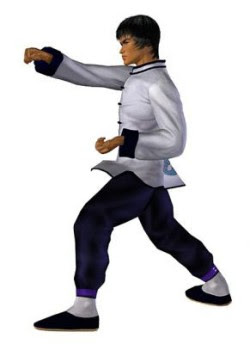 Forrest Law (born March 17, 1983) is a character in the Tekken fighting game series. Like his father, Marshall Law, his appearance, mannerisms and fighting style are inspired by Bruce Lee.

The proud son of Marshall Law, Forrest trains at his father's dojo to achieve Marshall's success and greatness. As a protective father, Marshall has forbidden his son from entering any contests outside the dojo.

Marshall's long-time friend and competitor, Paul Phoenix, visits once every few months to spar with Marshall. One day, when Paul arrived, Marshall was away supervising the building of a new dojo. Paul insisted that Forrest join him in some training exercises. Forrest declined, knowing that his father would disapprove. But Paul wouldn't take no for an answer.

Unaware of Marshall's restrictions on fighting, Paul suggested to Forrest that he join 'The King of Iron Fist Tournament 3'. Paul sold Forrest on the idea by telling him he's a better fighter than his father. Forrest knew his father would be angry, but he had to prove that he was worthy of one day inheriting the dojo. Marshall was enraged when he found out what happened. To him, it was as if his son had been kidnapped. 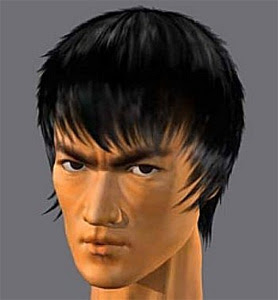 Forrest looks nearly the same as Bruce Lee, right down to his face and age. He also wears similar outfits to his father including the "sleeve-less" Game of Death tracksuit.
Forrest is one of two characters in the series to be replaced by the fighter he was the successor to, with the other being Combot.
Posted by bluedreamer27 at 9:38 PM