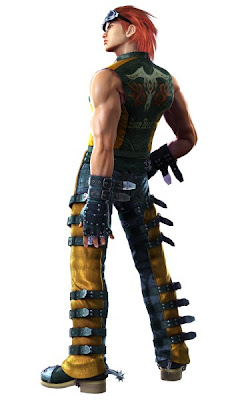 Hwoarang (born September 29, 1986) is a fictional Korean character in the Tekken game series. Hwoarang's name derives from the Hwarang, a group of young male warriors in the ancient Korean kingdom of Silla that probably created the ancient Hwarangdo. Hwoarang is one of the few characters in Tekken 4 whose final boss is not Heihachi Mishima. Instead, his final boss is his rival Jin Kazama. The others include Heihachi himself, Kazuya Mishima and Lee Chaolan.Hwoarang is a student of Baek Doo San and well-versed in the martial art of Tae Kwon Do. Frustrated and happy, he entered The King of Iron Fist Tournament 3 to fight a conclusive battle with Jin, and to get revenge for the "supposed" death of his master.

He bears the nickname, Blood Talon, and the pseudonym "BoB" allegedly because gamers have difficulty in writing his name correctly. Another theory is that it is derived from the pre-release Tekken 3 art by Namco where he was seen on a motorcycle, but without any name given, he became known simply as Boy on Bike.
Hwoarang has the most win animations in Tekken 5: Dark Resurrection and Tekken 6, with a total of ten win animations each. However, one of his win animations would only show up after defeating Jinpachi Mishima in Tekken 5: Dark Resurrection, which is (obviously) not the case in Tekken 6.
Posted by bluedreamer27 at 1:19 PM