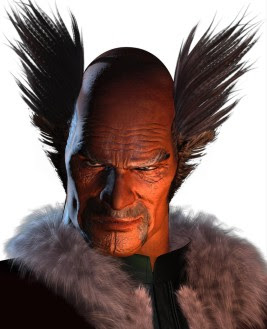 Heihachi Mishima (born August 24, 1932) is a fictional Japanese character in the Tekken fighting game series. Heihachi (roughly transa to "Eighth Peace of the Third Island") is one of only four characters (the others being Paul Phoenix, Nina Williams and Yoshimitsu) to have appeared in every game in the series.

The official backstory for each game somehow involves Heihachi or his immediate actions: he makes two appearances within the series as the main antagonist (in Tekken and Tekken 4) and one as the main protagonist (in Tekken 2), marking him as one of series' central characters, Heihachi is also featured in Soul Calibur II, another fighting game made by Namco. 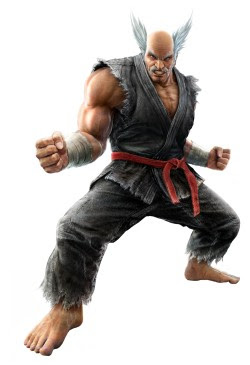 Heihachi is the son of Jinpachi Mishima, the father of Kazuya Mishima and Lars Alexandersson (though he is unaware of this until the sixth tournament), the adopted father of Lee Chaolan and the grandfather of Jin Kazama. He fights with the power of Mishima Style Karate and is the founder and the Commander of the Tekken Force Unit. He has hosted all but the second, fifth, and sixth King of Iron Fist tournaments (which were hosted by Kazuya, Jinpachi, and Jin respectively).
Heihachi Mishima appears in the live-action film Tekken portrayed by actor Cary-Hiroyuki Tagawa, he is initially a villain but becomes a much more sympathetic character than in the games, as he is willing to give his life to save Jin from the Tekken Corp soldiers. He is killed by his son, Kazuya Mishima, in his attempt to overtake Tekken. It looks as if Heihachi is killed near the end of the film. However, a post-credits scene reveals that he actually survived, saying "I am Mishima Heihachi. I am Tekken. You WILL obey!" to one of the Jacks.
Posted by bluedreamer27 at 10:03 PM