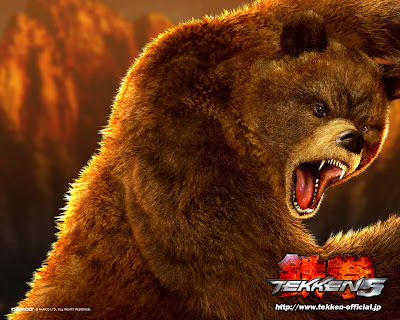 Kuma (born October 2, 1999) has the intelligence of an average, perhaps slightly dim human being, although this is obviously amazingly intelligent for a bear.

Kuma is Heihachi Mishima's pet.Learning of his father's defeat, Kuma Jr. decides to train with his master and enter The King of Iron Fist Tour. After the death of his former master, Heihachi Mishima, Kuma believed no one but he could rescue the Mishima Financial Group (MFG) from its captor. Eager to do just that, Kuma confronted the MFG. 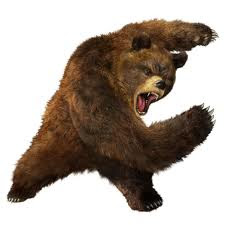 None of Heihachi's associates could understand why Kuma was so intelligent, which lead to a lot of them fleeing the estate in fear of the bear's intellect. This was further reinforced by Kuma's penchant for the taste of human flesh. Despite Kuma's unflinching loyalty to his master, Kuma liked to leave the side of Heihachi to sleep, even during the summer. This lazy approach means that Kuma's fighting style has never really matured and is very disjointed. This was demonstrated in the previous The King of Iron Fist Tournament, where Kuma was easily defeated by Paul Phoenix.

Kuma was very impressed with Paul's fighting prowess, as he thought that the only strong human was Heihachi. Heihachi was defeated in the last tournament by Kazuya Mishima, and so the two retreated into a mountain dojo to re-train. Kuma travelled to the second tournament with his master, vowing to destroy Paul Phoenix this time. If anyone gets in his way, he will eat them.