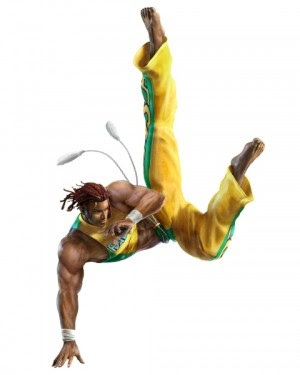 Eduardo "Eddy" Gordo (born March 1, 1978) is a video game character in the Tekken fighting game series. Eddy was born into one of the richest families in Brazil. Ever since he was a small boy, he knew he would one day take over the family business. He was well-liked in his home town because he was a hard worker who treated others as his equals. 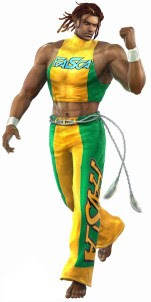 Although Eddy Gordo was a playable character in Tekken 4, he wasn't an actual participant in the tournament. It was implied that Eddy has disappeared during the fourth tournament for seeking vengeance against the person responsible for the death of his father (later turned out to be Kazuya Mishima). His student, also the granddaughter of his master, Christie Monteiro, entered The King of Iron Fist Tournament 4 to find Eddy, as this was the only clue that can lead her to him.
In the 2010 live-action film Tekken, Eddy is portrayed by Brazilian capoeira fighter Lateef Crowder. He participates in the Iron Fist tournament, originating from Valencorp, and is pitted against Raven. Despite putting up a good fight, Eddy is beaten. Unlike the games, he has no relation to Christie Monteiro, the latter instead serving as Jin's love interest.
Eddy is considered a master; the default color of his cords (a sign of rank in Capoeira) is white. In certain capoeira groups a white colored cord is the highest rank attained.
Posted by bluedreamer27 at 2:00 PM