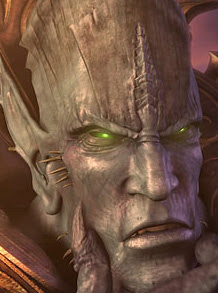 Archimonde was extremely brutal, and often killed his underlings when they failed him, or just to alleviate his own frustration. While he seemed to be more forgiving of failures of the underlings that he couldn't replace, his brutal nature was enough of a motivation not to fail him. Although he was highly intelligent, his arrogance and his inability to keep his anger in check proved a fatal flaw. His inability to keep his ego out of the equation was exploited by Malfurion Stormrage at the Battle of Mount Hyjal.
Archimonde is the final boss in the Battle for Mount Hyjal. The fight is a major battle for survival; even a single player's death can easily result in a wipe.
Posted by bluedreamer27 at 12:01 PM