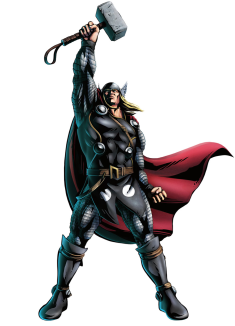 Thor, the son of Odin and the Norse God of Thunder, was featured as an assist character in Marvel vs. Capcom: Clash of Super Heroes, and makes his debut as a playable fighter in Marvel vs. Capcom 3: Fate of Two Worlds.
Thor is Asgardian, making him much taller and stronger than the average man. In Marvel vs. Capcom 3, he wears his costume after being reborn. He sports a helmet with large wings on the side and long, blond hair underneath. There are four metal plates on his tunic. Two that hold his red cape to him, and two that rest on his stomach. They are connected by yellow lines. His black tunic continues underneath his belt with an Asgardian symbol on it and a loop for his hammer, except the metal plates are replaced by two silver colored circles that are not metal. Underneath his tunic is a suit of chain mail, which is visible on his arms and legs. He wears black wristbands. On his feet are large boots that reach up to his knees with brown straps near the top and around the ankles. Underneath the brown straps in the ankles are two metal plates per foot on both sides. 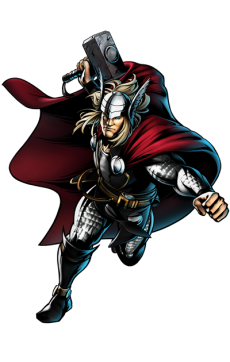 Thor is grapple based brawler character that also has an 8-way air dash which gives him good mobility when he jumps. People have often compared him to Zangief and Colossus in the early builds of Marvel vs. Capcom 3. He does A LOT of damage and can keep his opponent locked down when they're cornered. Thor isn't the most complicated character on the roster, as his overall game is fairly straight forward. You'll want to be in your opponent's face whenever possible — so you can land his Might Smash command grab, but it can be difficult to get there because Thor is a bit slower than your average character. A recently released video from the game has revealed that Thor's in-game taunt can max out the Hyper Combo Gauge if used, but it takes a few moments to do so.
Thor is a noble and brave hero. He has a great love for both Asgard and Earth, and sees both as his homes. Many other gods and Asgardians don't understand why Thor is so protective of Earth as he is the child of the benevolent Elder Goddess Gaea , but that doesn't stop him for embracing the people of Midgard (what Asgardians call Earth) as his friends. In his younger years, Thor was more brash and didn't think things through. After Odin sent him to Earth, Thor learned the better qualities his father wished to teach him. He also seems to forgive people quickly and honor family bonds, choosing to treat Loki like a brother until his next scheme comes to fruition. When Loki died during Norman Osborn's Siege on Asgard, Thor flew into a rage, despite all the trouble that his adopted brother had caused him over the years. Thor has chosen to always protect those he considers friends and family.
Posted by bluedreamer27 at 11:54 AM