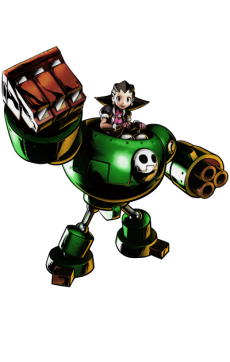 Tron Bonne is a character from the Mega Man Legends series of video games. She serves mainly as an antagonist but is also an anti-heroine of sorts in the series. She also has forty-one Servbots at her command, one of which is a playable character in Marvel vs. Capcom 2.

Only fourteen years old, Tron is the mechanical genius of the Bonne family, possessing an IQ of 180. She is in charge of building and maintaining all of the Bonnes' mechanical devices, including the Bonne family's air ship, the Gesellschaft, her loyal Servbots and even the ships they pilot, the Drache and the Hornisse. Tron is known for piloting machines such as the Gustaff, Ferdinand and the Jagd Krabbe in battle. She has always wanted to go on missions and adventures just like her older brother Teisel, but was never given the chance until Teisel and Bon were kidnapped by Loath and Glyde. After rescuing Teisel and Bon from Loath's clutches, Tron has since acted as Teisel’s "right hand girl" in all of the Bonnes' adventures. Besides her older brother Teisel, she has a younger brother, Bon.

Tron is also the creator and "mother" of the Servbots, whom she treats much like children. Finally, although Tron angrily denies it, she has a huge crush on her archenemy, MegaMan Volnutt. 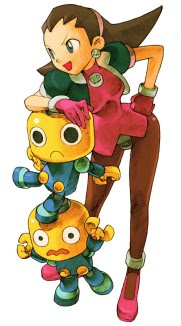 Though she is a pirate and has been shown to be rather greedy and egotistical, she has also shown a noble morality throughout the series, performing altruistic deeds like aiding her archenemy Mega Man in the Mega Man Legends series; or chastising, defeating, and turning in a crime boss to the police for his barbarity of attempting to utilise an ancient robot vehicle to devastate and conquer the world in the spin-off game The Misadventures of Tron Bonne. Thus, Tron knows when to "draw the line" when performing acts of piracy, or when any scheme becomes too morally questionable for her liking.

Temperamental and prideful when in the presence of others, Tron's personality towards her forty-one Servbots is more reminiscent of a disciplinarian mother towards her children. She is very harsh and demanding towards her Servbots, but is quick to praise and reward them for good performance, being very caring and compassionate towards them when they're not performing any number of tasks.

Tron Bonne is an unorthodox character, using her Bonne Strike and long ranged, damaging normal attacks to keep the opponent pinned, leaving them vulnerable to her unblockable command grab. Tron also possesses a large amount of health, on par with the Hulk

Tron Bonne is also very effective as an assist character, with three assists that are effective if used correctly. Her Gustaff Fire assist in particular, is very difficult to punish and causes a freefall state if it hits an airborne opponent