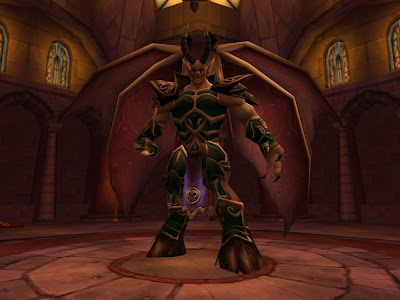 Balnazzar (currently under the guise of Saidan Dathrohan, Grand Crusader of the Scarlet Crusade) was one of the three nathrezim siblings left behind in Lordaeron to oversee the demonic conquest of that land. The return of Prince Arthas, following the defeat of Archimonde, sent the three brothers packing, but they quickly regrouped and concocted a new plan to destroy Arthas once and for all. Though they (and Sylvanas Windrunner, who attacked Arthas on her own terms) didn’t destroy Arthas, the undead prince left Lordaeron, leaving Balnazzar to rule the Plaguelands. Soon after, Sylvanas (who forcibly made Varimathras join her) laid siege to Balnazzar's forces and ultimately forced Varimathras to execute Balnazzar. He later came to posses the body of Saidan Dathrohan, a founder of the Scarlet Crusade.
Balnazzar and his brothers, Varimathras and Detheroc, were not aware that the Burning Legion had been defeated at Mount Hyjal until months after the fact. It was only when Arthas returned from his sabbatical to Kalimdor that he announced Archimonde's destruction. Arthas stated that their deaths would complete their folly. Balnazzar and his brothers quickly teleported away before Arthas could strike. 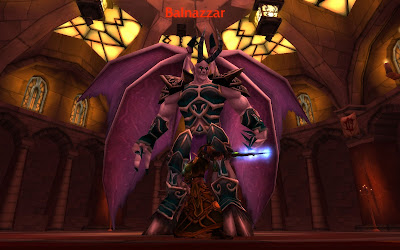 Also, he is the final boss of the Stratholme Living Side, located within the the Scarlet Bastion in The Crimson Throne. He begins the fight as Grand Crusader Dathrohan, but eventually sheds his human disguise for his true form. It should be noted that if killed too quickly, he will not transform into his true form, and players will not receive the achievement regardless of the kill.
Posted by bluedreamer27 at 1:24 PM