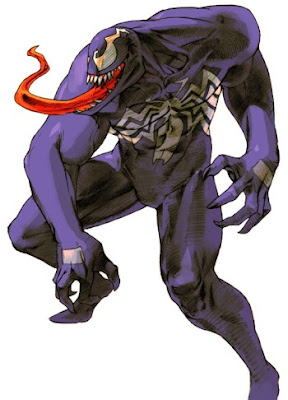 'Venom' is the moniker of the humiliated journalist Eddie Brock when he bonds with the alien symbiote that first attached itself to Spider-Man when it first came to Earth. One of Spider-Man's deadliest foes, and sometimes a valuable ally, Venom is capable of anything Spider-Man can do, only stronger. Even worse, he is completely invisible to his Spider-Sense, granting him the element of surprise in every one of their encounters. Venom here uses his symbiote body to form tendrils and attack as well as webbing.

The Venom symbiote has bonded with various other hosts, most including Mac Gagan (the Scorpion) and most recently Flash Thompson. 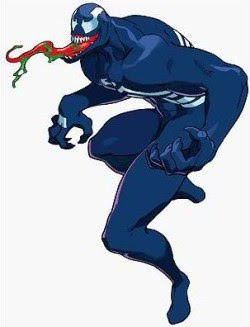 Due to the fact that it was grafted to him first, the Symbiote bears many of Spider-Man’s unique abilities and passes them on to its next host. Eddie Brock had, previously to discovering the Symbiote, conditioned his body to lift up to seven hundred pounds. With the Symbiote’s assistance, he could lift up to eleven tons with little strain. He could also cling to walls and fire pieces of the Symbiotes’ substance as webbing at high pressure up to a distance of seventy feet. The tissue is regenerative, so Brock didn’t have to worry about losing the Symbiote as he fired the projectiles. The strands can be incredibly adhesive, and have a tensile strength of one hundred twenty-five pounds per square millimeter of cross section. Venom also possessed a power similar to that of Spider-Man’s “Spider Sense”, though it was not as efficient, as Venom's reflexes were not as honed as Spider-Man's.

Venom was also extremely durable, and was able to take impact from small-arms fire with ease. However, the Symbiote is particularly vulnerable to sonic and heat-based attacks. The Symbiote could also blend itself in with the background.

Venom is also widely known for his extremely long tongue, which he could use like a prehensile tail.