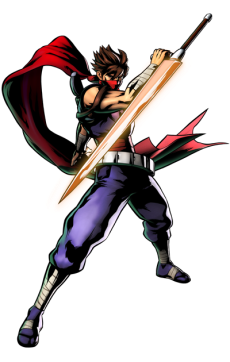 Hiryu is a special agent known as a Strider. Striders are an elite team of ninja mercenaries, and one of the world's most influential secret maneuvering groups, having existed since the feudal era of Japan. Striders are a secret organization specializing in kidnapping, assassination, demolition, and other types of missions that they have performed throughout history in service of the greater good.

Hiryu is one of the most skilled Striders, obtaining the high rank of Special A-Class at a young age. Little is known about him besides the fact he is the Striders' best assassin.

Strider Hiryu wears what is thought to be a Strider's traditional uniform. He has a large, red scarf wrapped around his mouth and extending to his back, almost acting as a cape. He wears a blue, sleeveless suit, with the shirt and pants seperated by a large red sash and a loose-fitting, white belt. His ankles and wrists are wrapped in white cloth, and he wears blue sandals. 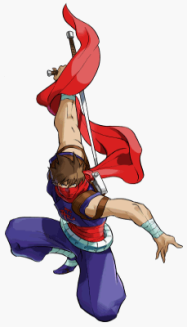 Stider Hiryu is silent and stoic. He rarely speaks, unless he has to, adding to his mysterious personality. Of course, Hiryu speaks more often in Ultimate Marvel vs. Capcom 3 to allow for Special Conversations. Hiryu's main goal is to serve the Striders in protecting the world, and seems to have few interests outside of that.
Hiryu was one of the first four characters to be confirmed for Ultimate Marvel vs. Capcom 3, alongside Ghost Rider, Firebrand, and Hawkeye. If character rivalries are still of concern, Hawkeye could be considered Hiryu's rival. Both already mastered their basic fighting style at a young age, Hiryu being the youngest Strider to reach Special A-Class, and Hawkeye learning his archery skills as a child working at a circus. Their personalities contrast greatly: Hiryu is quiet and stoic, while Hawkeye is loud and brash.