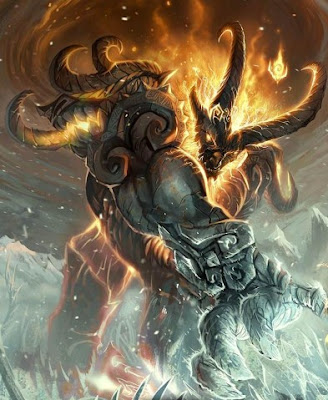 Sargeras is the creator and leader of the Burning Legion. Sargeras was once a vanir titan, a Champion of the Pantheon chosen to defend the worlds they had created. Sargeras has changed over the millennia. While he once served his race as guardian and protector, he is now the titans' worst enemy. Sargeras works to undo what the titans have strived for ages to achieve. He is now the master of all that is evil and demonic. Lesser beings quake and flee in his presence.
Sargeras was a mighty giant of molten bronze who led the armies of the titans, the Champion of the Pantheon's cause. Like the rest of his kind, he was altruistic and just, unable to conceive of pure evil. Sargeras was called upon to defeat and imprison the hordes of demons native to the Twisting Nether, so that their evil would not contaminate the titans' vision of order. Sargeras went about his task devoutly for countless millennia. 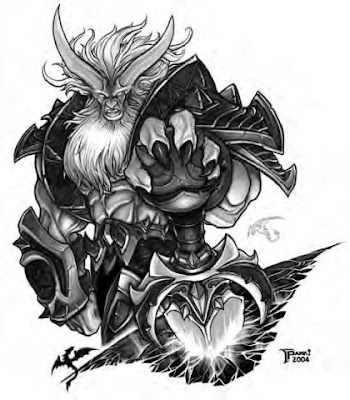 Sargeras is a huge being almost beyond comprehension. He is fully clad in a burning suit of molten, black armor. Wildly dancing flames surround his head and form a thick mass of hair and a sweeping beard. A pair of horns exteeries of viciously hooked barbs. Demonic influences have given Sargeras body flames.
Sargeras doesn't fight fair. He fights dirty and goes for the throat as quickly as possible. He also doesn't fight alone. Sargeras has a universe of formerly vanquished demons that he now commands to do his bidding. Most of them even do so gladly.
Posted by bluedreamer27 at 1:14 PM