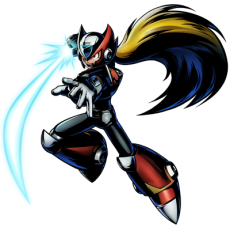 Zero is one of the main protagonists from Capcom's Megaman X and Megaman Zero series.

The ultimate result of the infamous Dr. Albert Wily's research, Zero was built with the intention of surpassing anything Wily had built before, and to destroy his long time nemesis's creation, Megaman, as well as his own misguided creation, Bass. Being made before the introduction of standard mass produced Reploids and during the construction of X, his internal processes and construction are considered to be more advanced than most known robotics and on par with X's parameters and capabilities.

He is initially outfitted with an armament known as the Z-Buster, an arm cannon capable of firing of blasts of energy as well as manipulating it to launch it in special variations and projections. 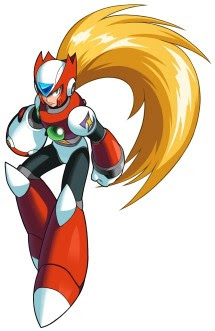 Zero's playstyle appears to be a sort of Combo Freak. As in Zero's special moves don't do a lot of damage on their own, but are meant to be strung together in super-long and highly damaging combos. When facing a skilled Zero player, one opening from you can allow Zero to perform an extremely long combo that could potentially take away more than half of your lifebar, as well as being able to sport an interesting amount of pressure. In gameplay, Zero mainly uses his trademark weapons, the Z-Saber and Z-Buster. He also performs a wide variety of attacks and techniques that he gained during the X series. But as a homage to his X series specs, Zero is has quite a low defense rating (or in this case, a low health rating). Get hit by a powerhouse and he's done for in 1 or 2 combos, so be careful about getting hit. He can dish it out, but he can't take it.
Zero can fight from both far and close, being able to put pressure from afar with his Hadangeki and Zero Buster, or extending brutal combos(e.g: Combo into a launcher while charging a Z-Buster, air combo finishing with Z-Buster, downward Hienkyaku to reach ground quickly, then repeat). Zero also has a strong meter build as he combos his opponent, making his Hyper Combos quick to use if needed. Be aware that Zero is actually somewhat nerfed from his TvC counterpart, so some of his more popular combos from there have to be done in a different fashion. Despite this, Zero's new tools and tweaks can help him with that.
Posted by bluedreamer27 at 11:31 AM