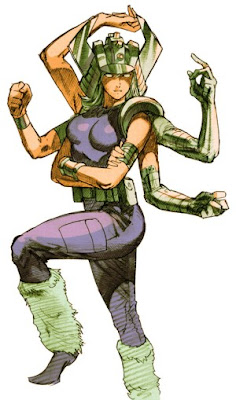 Spiral's real name is Rita Wayword, a.k.a 'Ricochet Rita', a professional stuntwoman who befriended Longshot when he first appeared on Earth. The story of how Rita became Spiral is a paradox: Rita was attacked by her evil, future self which led to her meeting Longshot and falling in love with him. When Longshot sought to return to his home dimension, the Mojoverse, the lovestruck Rita went with her boyfriend, only to watch Longshot fail and be captured alongside him by the dimension's evil overlord, Mojo. Longshot was promptly mind-wiped to forget all about Rita, while a much worse fate was left for Rita.
Spiral was revealed to have conquered an alternate timeline and referred to herself as "The Apocalypse". She managed to kill most of that Earth's heroes, and only Cable and some of his X-Force/New Mutants allies were left. Spiral had kidnapped that universe's Sunspot and tortured him by making him make love to her until his rescue. With the aid of Shatterstar, Spiral was evidently defeated and apparently returned to Mojo's services. She later attacked the X-Men together with Mojo, but ended up defeated once again. 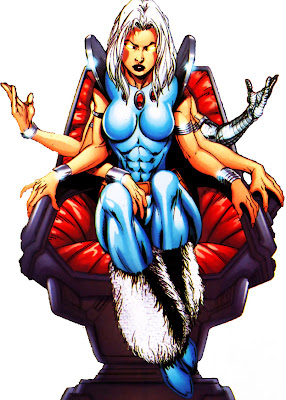 piral has powerful mystical abilities. With gestures or dance moves, she can teleport herself and numerous people across great distances. Teleportation and powerful spells require more complicated dance moves. Spiral's spellcasting powers can be triggered through small hand gestures of her many hands. Spiral often incorporates knives and swords into more complicated spells. Spiral can also disguise herself through her magic. Spiral can open gateways between dimensions and travel through time, though it has been implied that she sometimes requires Mojo's help to successfully teleport from one dimension to another.
﻿Spiral, along with Mojo, appear in Viewtiful Joe's Ending in Marvel Vs Capcom 3, where they are filming a movie for Joe hoping to get Major attention since Joe is the "Hero who beat Galactus".

Thanks so much for all your great information. Congratulations on a fabulous website! It’s a great resource. Throwing Knives