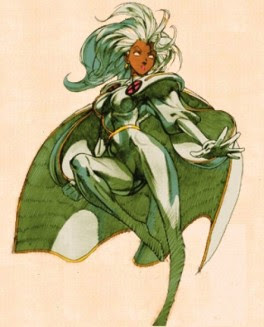 Storm is a mutant who possesses the ability to psionically control weather over limited distances (sometimes referred to as atmokinesis). She can create any kind of precipitation: fog, snow, sleet, rain, etc.She can also create winds up to and including hurricane-force, as well as controlling lightning and other electrical atmospheric phenomena, which she can direct manually. She can also manipulate the wind to support her body weight and allow her to fly. She has also shown ability to control and direct ocean currents, but to what extent is unknown. She can control the climate and weather so precisely that she can create a rainstorm around her, yet remain untouched by the rain. Storm has also demonstrated the ability to control natural forces that include cosmic storms, solar wind, ocean currents, and the electromagnetic field. She has demonstrated the ability to separate water molecules into oxygen and hydrogen via electrolysis, allowing her to breathe underwater. While in outer space, she is able to affect and manipulate the interstellar and intergalactic mediums. Storm can alter her visual perceptions so as to see the universe in terms of energy patterns, detecting the flow of kinetic, thermal and electromagnetic energy behind weather phenomena and can bend this energy to her will. Storm is widely regarded to be one of the most powerful mutants on Earth. Iron Man has stated that she is possibly an Omega-level mutant--one with virtually unlimited power and potential. 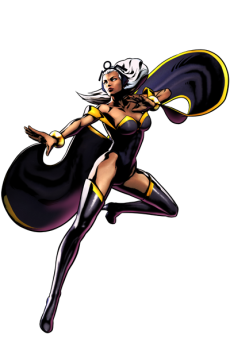 Storm is quite possibly the most versatile of all the Marvel characters in the game. She can be played both aggressively and defensively, possessing a variety of ways to close in on opponents. Her combo attacks--both ground and air--are potent and inflict solid damage, especially when chained into her Ice Storm Hyper Combo. Storm can easily keep opponents at bay with her Whirlwind and Typhoon attacks and her ability to fly helps to keep her out of harm's way.

Storm's Hyper Combos are some of the most powerful in the game, particularly Ice Storm, which has been vastly improved over its previous incarnations. It does tremendous damage on its own, but is even more dangerous when placed at the end of a combo attack and does considerable chip damage when blocked. Lightning Storm has a smaller radius of effect than before, but does more concentrated damage in an Air Combo when cancelled during Lightning Attack. Her third Hyper Combo, Elemental Rage can also be worked easily into a ground combo.