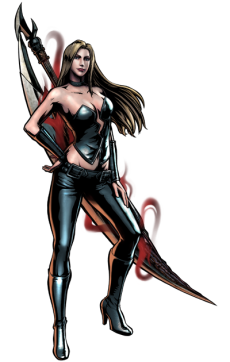 Trish is a character who was originally from the game Devil May Cry, and has appeared in every installment of the series, except for Devil May Cry 3. Trish's personality is hard to pin down as she has changed slightly throughout the games. In the first Devil May Cry, She became excited at the idea about being a "sidekick" at the end, giving her an almost a innocent quality. However in the anime, her personality changes, as she constantly seems to be working for her own gain . This same personality goes over into her character in Devil May Cry 4. Although while disguised as Gloria, she takes on a more refined and humble attitude towards the other members of the Order of the Sword, this is just good acting on her part. 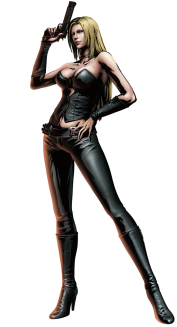 Trish, after forming a partnership with Dante in Devil May Cry fights using the Sparda, as she did in the first two installments of DMC. She has access to Round Trip as a projectile, and Super Move. She can perform her lightning abilities from the original Devil May Cry, as well as Luce & Ombra, guns she had in Devil May Cry 2.

Trish is described as a "Keep Away" character, specializing more on keeping her opponents far away from her and manipulating the space usable by the opponent. She is considerably good with combos, though not advisable as the rushdown-type characters. Part of her keepaway skill is setting Traps, both in the air which are invisible and on the ground which shoot bolts of electricity up in the air as soon as her opponent jumps or walks over them. This keeps the opponent immobilized until attacked or until the trap fades. She is capable of shooting electric projectile attacks, three different types; 3 slow, but powerful, bolts of electricity. 2 bolts that are average in speed and power. and 1 single bolt that is the weakest, but travels the fastest.

Her grab moves involve her pinning her opponent to the ground, sitting on them to prevent them from standing, then pulling out her guns Luce and Ombra, and shooting them at Point-Blank Range in the face.