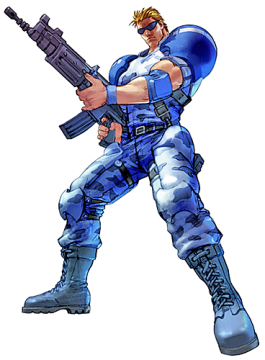 Unknown Soldier, also known as Player 1 from the shooter game, Forgotten Worlds, is a helper character who appears on Marvel vs. Capcom. Unknown Soldier also makes his playable crossover debut with Player 2 and Sylphie the Shopkeeper in Namco x Capcom, being able to dress up as characters to use other attacks due to distortions. According to the storyline, he was created alongside Player 2 to defeat Emperor Bio, who has turned the Earth into a desolate wasteland called the 'Dust World.'

Certain characters from his game, Gods of Thunder and Wind and the King of Gods make a cameo in one of the background stages. 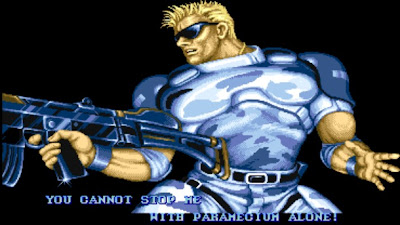 Unknown Soldier's a regular Assist Projectile Type Character. He fires a few beams from his gun, with fair speed and power, which gives a good chance for the player to connect other attacks or even Hyper Combos.
Posted by bluedreamer27 at 12:14 PM