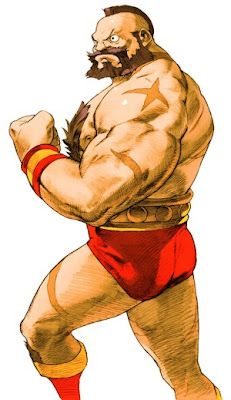 Zangief is a video game character created by Capcom. He is part of the Street Fighter series of fighting games.

As the greatest professional wrestler in the Soviet Union, Zangief was contacted by a man referred to as Erai Hito (Great Man) to represent his country in the second World Warrior tournament; this individual clearly resembles former Soviet leader and President, Mikhail Gorbachev.

Zangief agreed and began training in the extreme climates of Siberia. He built his strength by wrestling polar bears, gaining many fearsome scars in the process, concocting his trademark Spinning Piledriver after being picked up by a cyclone while performing a piledriver on a bear. With the assistance of his government, Zangief emerged from his training as "The Red Cyclone", determined to demonstrate Russia's magnificent power to all of the world. 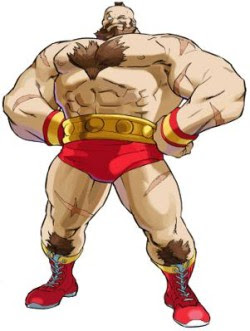 Zangief is a close range character as he is a wrestling type. Many of his moves are more complicated to pull off due to the 360 motions input required to perform the moves, making him a character for advanced players. Zangief is one of the slowest of all characters in the Street Fighter games, and presents a large target, yet is widely considered top-tier as he can control large amounts of space whilst negating the ability of other characters to do so with their projectile moves, with evasive techniques such as Spinning Lariat and Banishing Flat and the ability of his Spinning Piledriver to grab opponents out of most ground-based moves.
Posted by bluedreamer27 at 11:26 AM