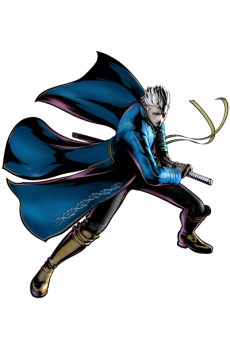 Vergil is the twin brother of Dante and the other son of the The Dark Knight Sparda . Unlike his heroic relatives, Vergil is an aloof individual who seeks out the power their father left behind at any cost. Wielding the keepsake Okatana Yamato by his side and a command of vast magical powers, he rivals his brother, Dante, in every regard, his swordsmanship arguably even greater.
At first glance, Vergil appears physically similar to Dante. While they share the white hair color, Vergil's hair style is swept up to resemble his father's. In stark contrast to Dante's wardrobe featuring a largely red color scheme, Vergil wears blue predominantly, and dresses in a manner that gives him a bit of a regal air (in this case; a long coat with three tails and a snake-like pattern on the right side, a black sleeveless top and brown boots), in contrast to Dante's more casual look. 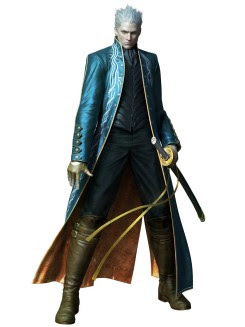 Vergil is a cold and aloof individual who seeks power above all else. Any traits of humanity he may have had have been set aside in his pursuit to succeed his father. Vergil has no qualms with fighting Dante, or even attempting to kill his brother if it conveniences him. Though initially perceiving himself superior to his brother, Vergil does not exhibit an outward arrogance (which is typical of similar villains). Despite generally serving as an antagonist to Dante, Vergil has been known to fight alongside his brother and set aside some of his warrior ideals, should particular circumstances arise.
Posted by bluedreamer27 at 12:49 PM