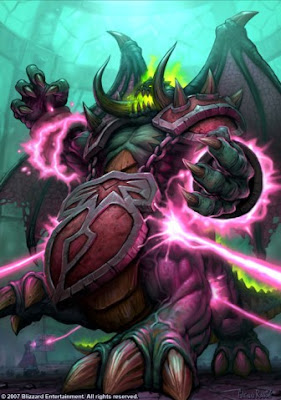 Magtheridon, the former Lord of Outland, is a pit lord who conquered the ruins of the orcish homeworld following its destruction. His reign was ended by the arrival of Illidan Stormrage, who took Magtheridon's throne at the Black Temple for himself. Deciding that Magtheridon would have a further part to play, Illidan had Magtheridon's body dragged to the Hellfire Citadel where he imprisoned the pit lord, leaving him at the mercy of the fel orcs. A group of adventurers entered the depths of Hellfire Citadel, released the former Lord of Outland from his bonds, and finally destroyed him, taking his head as proof of their prowess.

Magtheridon was voiced by Earl Boen, a narrator for WoW's cutscenes, in World of Warcraft: The Burning Crusade. 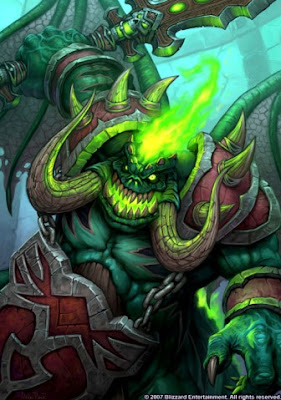 A brutal pit lord and servant of Mannoroth the Destructor, Magtheridon found his way to Draenor after its cataclysm. With the clans in disarray, and most killed in the disaster, Magtheridon was quick to show his power, and rallied the surviving orcs under his pennant. The orcs were corrupted and became fel orcs. He declared himself the ruler of the ruined world Outland. Over the years, Magtheridon brought legions of demons to Outland through the four dimensional gateways which Ner'zhul shattered the world with, and his forces became very expansive.
Magtheridon is the boss of his lair, his rumbling cries are heard throughout the Hellfire Citadel. Strangely, he was purple in Warcraft III but now in Burning Crusade he is green like most (if not all) pit lords.
Posted by bluedreamer27 at 1:32 PM