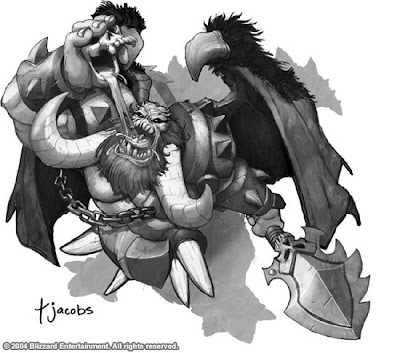 Mannoroth was a pit lord whose ruthlessness and vile cunning made him into one of the favoured lieutenants of his masters, Archimonde and Kil'jaeden, the champions of the Burning Legion. Known as “the Destructor” and "the Flayer", Mannoroth was the barbaric leader of the pit lords when the dark titan Sargeras subjugated them and bent them to his will. When Archimonde was placed in command of the pit lords, he recognized Mannoroth’s value as a brutal, bloodthirsty fighter and made the pit lord his second-in-command. Mannoroth helped lead the Burning Legion in assaults on countless worlds, and led the first invasion of Azeroth.

Mannoroth was among the demons who ventured into Kalimdor during the War of the Ancients.

He singlehandedly slaughtered entire regiments of Kaldorei defenders and sowed chaos by unleashing squads of doomguards across the land. Though he battled with brutal ferocity and slaughtered many, he was defeated by Cenarius and his followers and sent back into the Twisting Nether when the Well of Eternity was destroyed.

Although his forces were ultimately defeated and forced to flee from Azeroth, Mannoroth was pleased with the level of carnage that he had inflicted. 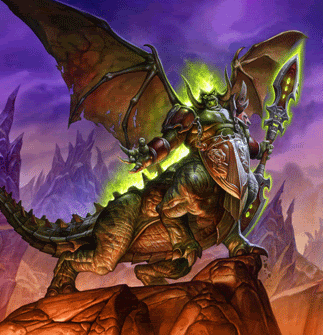 Mannoroth was a simple being with no overriding ambition to change his station in life. Craving blood and carnage over everything else, he willingly acted as an enforcer for Archimonde and the Burning Legion. His only desire was to wage unending war against the mortal races of the universe. He was a terribly efficient weapon of destruction for the demonlords and could always be found at the forefront of their invasion forces. Mannoroth had forever been cursed with an immeasurable, unending thirst for blood. Even the bloodlust of the orcs was a minor compulsion compared to the absolute addiction that bloodletting was for Mannoroth. In the absence of mortals to fight, Mannoroth often turned on his own demon kin, slaying felhounds and infernals with an unnerving sense of satisfaction. He preferred the kill to the chase, and would quickly slay mortals who were unfortunate enough to stumble upon him. Mannoroth sought out the most concentrated area of foes and wades into battle. He was not happy unless he was spilling the entrails of his enemies at his feet. When a victim fell, he usually spent an extra attack or two on the victim making sure the target was quite dead. This could be quite messy, which was exactly how Mannoroth liked it. In fact, he could get a bit reckless if foes were not dropping to his massive two-bladed sword at least every attack.
Posted by bluedreamer27 at 12:18 PM