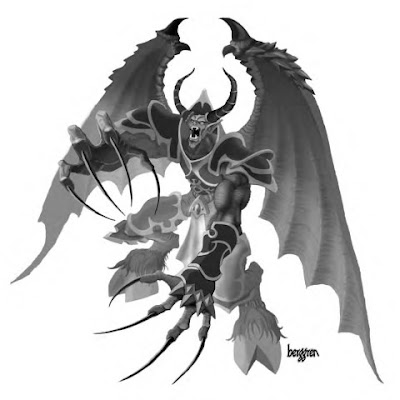 Tichondrius was the leader of the Nathrezim of the Burning Legion, under the command of Kil'jaeden. He was a major character in the Warcraft III Path of the Damned, The Invasion of Kalimdor, and Eternity's End campaigns. While he appeared often, he was never available for the user to control.
Tichondrius did not appear to have any part in the War of the Ancients, though at times in WarCraft III, his comments implied firsthand experience. Since he is not mentioned in the War of the Ancients trilogy, he may not have played a significant or noteworthy role.
Prior to the Third War, Tichondrius was chosen by Kil'jaeden to personally police the newest agent of the Legion, Ner'zhul, the malefic Lich King. Tichondrius was none too pleased with the appointment, but accepted it in the end. As befitting his status as the greatest of the Nathrezim, Tichondrius was placed in charge of a number of Scourge operations. Following the corruption of Prince Arthas Menethil, Tichondrius introduced himself to the Death Knight, providing him with orders from Ner'zhul, especially concerning the resurrection of Kel'Thuzad. Because he didn't entirely trust Arthas, Tichondrius pretended to be another one of the Lich King's followers. The ghost of Kel'Thuzad, however, informed Arthas that Tichondrius and the other dreadlords were actually the Lich King's jailers. 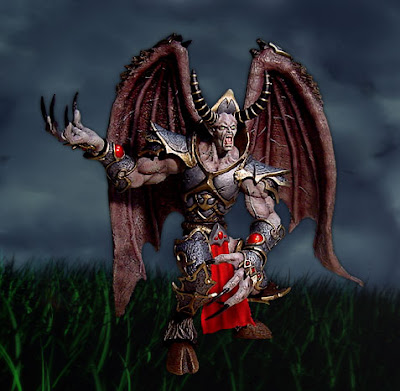 Tichondrius regularly discussed the Scourge's progress with his colleagues, Anetheron and Mephistroth, who remained on a Legion planet in the Nether. The Darkener expressed (justified) concern that Ner'zhul had alternative plans for his new "champion," but Mephistroth pointed out that he "wouldn't dare undermine our efforts now."

The dreadlord continued his work, eventually overseeing the death of Uther Lightbringer, the invasion and destruction of Quel'Thalas, and the siege of Dalaran. Once Archimonde was summoned, he decreed that the Lich King was no longer needed, and gave Tichondrius control of the Scourge.