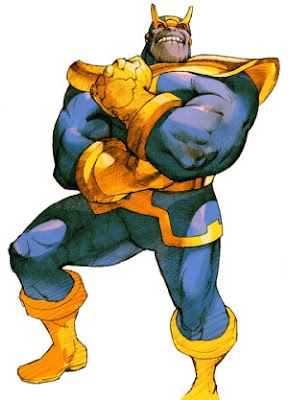 Thanos is a character in the Marvel Vs. Capcom series. He appears in Marvel Super Heroes as the game's final boss, and in Marvel Vs. Capcom 2 as a regular playable character
Thanos was born on Titan, a moon of the planet Saturn to Mentor and Sui-San. Due to a genetic quirk Thanos is born with the Deviant gene and as such resembles the Deviants - the Eternals' cousin race - more than his own people. Although treated fairly by his race, Thanos is mindful of his appearance and becomes distant, only keeping company with his brother Eros. Thanos matures to adulthood, and via the use of bionics and mysticism augments his abilities to easily become the most powerful of the Titanian-born Eternals. 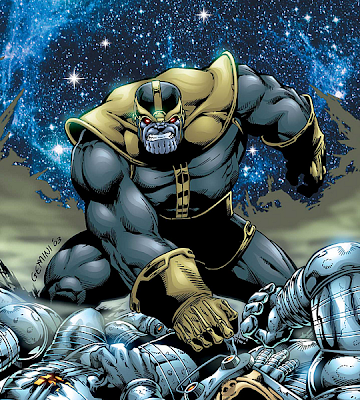 Thanos is an extremley powerful individual. Being an Eternal, Thanos possesses super-human strength, endurance, reflexes, and agility. His skin is highly resistant to heat, cold, radiation, electricity, aging, toxins, etc. He is able to survive indefinitely without food or water. He has been "cursed" by Death with immortality. Also, his mind is resistant to most psychic attacks, and is capable of projecting blasts of cosmic energy from his eyes and hands.

He came to acquire the Cosmic Cube, which allowed complete manipulation of reality and the elements.

However, this was nothing compared to the power that Thanos recieved when he obtained the Infinity Gauntlet. He possessed unlimited control over the universe; more specifically: Time, Space, Power, Mind, Reality, and Soul.