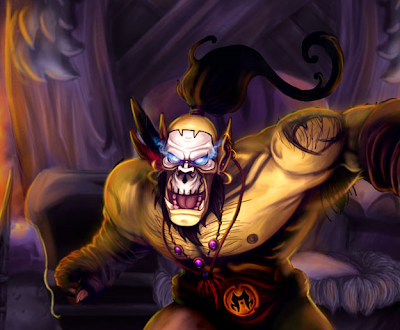 The Elder Shaman Ner'zhul was the Warchief of Draenor, the clans that remained uncaptured after the Dark Portal was destroyed in Azeroth. He was tricked into making a Blood Pact with Kil'jaeden the Deceiver; one that bound the orcs into the service of the Burning Legion. Following the Second War, he opened several portals on Draenor in an attempt to seek out new lands to escape to and conquer, but was immediately captured by Kil'jaeden. His mortal form was destroyed and his spirit was transformed into the spectral Lich King, which was then encased in the mystical ice of the Frozen Throne atop the Icecrown glacier in distant Northrend. 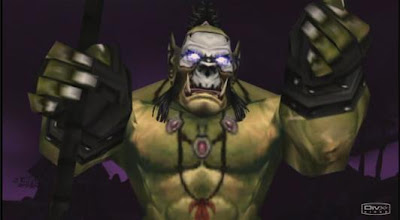 Ner'zhul was the chieftain and elder shaman of the Shadowmoon clan and one of the most popular figures in orcish society. He was admired, respected and venerated by all for his deep connection to the spirits, and was the closest thing the orcish race had to a single leader prior to the foundation of the Horde. However, deep within, Ner'zhul craved a power he did not have...
Ner'zhul had the gift of true visioning and all he had seen would indeed come to pass
Posted by bluedreamer27 at 12:50 PM