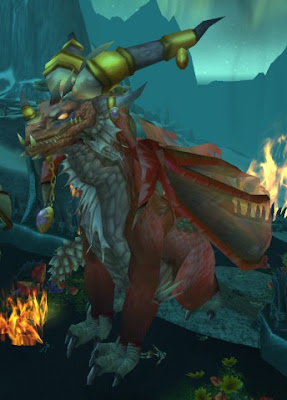 Alexstrasza the Life-Binder, Aspect of the red dragonflight, is the guardian of all life in the world of Azeroth. She was one of five great dragons chosen by the titans to be empowered with a portion of the Pantheon's power and rule over her flight while they watched over Azeroth and its inhabitants. The titans also appointed her queen of all dragons.

Today, Alexstrasza resides at the top of the Wyrmrest Temple in the Dragonblight, a place considered holy ground for the dragonflights. No longer content to simply watch over the mortal races, the Dragonqueen has now taken action in bringing the dragonflights together to battle the now-hostile blue dragonflight and its Aspect, Malygos, as well as the looming threat of the Lich King.

Alexstrasza was one of the three dragon aspects that fought the demons of the Burning Legion during the War of the Ancients. It was also in that war that the black dragon Neltharion deceived his fellow Aspects, using the Dragon Soul (also now known as the Demon Soul) to steal a portion of their power. After the War of the Ancients ended, when Illidan, brother of Malfurion Stormrage, emptied three vials of water from the Well of Eternity over the river of Mount Hyjal, Alexstrasza, along with Ysera and Nozdormu, decided to use the Well as a tool to heal the war-ravaged land by placing a magical acorn from G'Hanir, the Mother Tree, into the new Well of Hyjal. The tree that grew from this acorn was proclaimed the original World Tree of Azeroth, and is named Nordrassil.

For some time after, she and her fellow red dragons were at peace, but over time they began to argue about how best to shelter and protect the world. The rise to power of humans and other races left many believing that these new people were dangerous and should be destroyed, while others of Alexstrasza’s ilk felt they should be educated to teach them right from wrong. 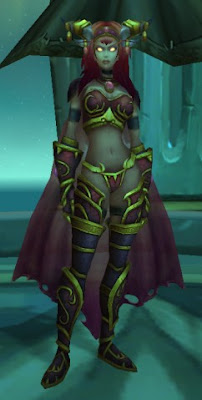 or someone of her power, the Dragonqueen is surprisingly compassionate. While Ysera has always favored the dreaming races and the students of Cenarius, Alexstrasza and her flight are known for avoiding killing if at all possible (as they are the defenders of life). Alexstrasza loves all living creatures and protects them, and only those who menace the dragonflights or the world face her wrath. Alexstrasza is supremely confident in her strength and righteousness. She does not seek out combat, but destroys only to punish or renew. In battle, she observes her foes carefully before striking at those she believes are the most deserving of her wrath. Enemies who flee when their leaders are defeated are generally allowed to escape, having learned a lesson they will not soon forget.

She prefers peace and solitude, although she will defend her lands with all her power against any who threaten them without due cause. She often uses her shapechange power to appear as a creature of nature, in order to see what encroaching mortals will do before revealing her presence. Alexstrasza is devoted to all forests, and to a lesser extent all other types of green and fertile growing things. She considers all natural woodlands her home, and she need fear no beast within such lands. Although many of Azeroth’s natural creatures revere the Great Red Leviathan, she is not a goddess and does not pretend to be otherwise. Alexstrasza is rarely venerated by any particular group, although some elven communities pay her homage. Druids of the wild in particular appreciate her serene presence, considering her second in importance only to Ysera.