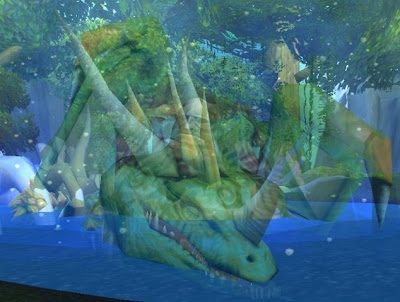 Ysera, the green Dragon Aspect, is charged with the protection of the Emerald Dream, but also watches over Azeroth. To the druids she is known as the "mother" of Cenarius, but since he is not a dragon, this is not literal.

Ysera is green, and her skin glitters with countless emeralds for scales. Her physical form is ghostly, ethereal, like watching a living dream or vision. The Emerald Dream is a place where all living beings dream when sleeping. It is a place of where sentient beings have dreams of hope, and faith for a better tomorrow. From the Emerald Dream, Ysera can observe all lesser races. Her eyes are always closed, although you can see her pupils move constantly below her eyelids as if watching many dreams at once.

There are only a few recorded moments in history where Ysera has opened her eyes. When she does, a person can see eyes of many colors, like a rainbow. The eyes of every sentient creature can be seen at once through her eyes. Ysera opened her eyes during the War of the Ancients after seeing Malorne dead, and again when addressing Malfurion Stormrage on his druidic prowess. She opened them another time during the Second War, before Krasus, when he tried to convince her to help free Alexstrasza. Ysera also opened her eyes after she regained her powers during the fight against Deathwing. Ysera fought alongside the other Dragon Aspects against the evil of Deathwing while Rhonin destroyed the Demon Soul. 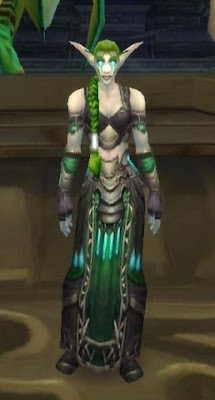 Ysera can assume the form of a female from any race, which she chooses depending on whom she is talking to. Often she wears a dress of emerald green, emerald jewellery, and has emerald-green hair.

Ysera avoids and dislikes combat, especially in her realm. When angered, she is terrible, paranoid and impulsive. She keeps herself isolated in the Eye of Ysera within the Emerald Dream, and is rarely seen in the real world. When she does visit the living plane, she shapeshifts into a humanoid form, covered by a green hood, and her eyes are always closed.

When in combat, she attacks with her greenish breath to put her opponents to sleep, and rarely strikes to kill. She prefers to neutralize her enemies and banish them away from her realm.

Ysera can travel from mind to mind to travel anywhere she wishes by entering the dreams of any living being sleeping. She may enter the dreams of a target to communicate with or warn the sleeping creature. Ysera has the ability to planeshift between the real world and the Emerald Dream.

According to War of the Ancients, Ysera was said to be the mother of Cenarius, and close friends of Malorne. It was later revealed that Ysera was only the adoptive mother. Ysera taught Cenarius the secrets of the Emerald Dream, forming a close bond with him. Many fans theorize that Elune and Ysera are the same being, since they are shown as entities that care for the lesser races with compassion. However, writer Richard A. Knaak has confirmed in his book War of the Ancients Trilogy that they are NOT the same.