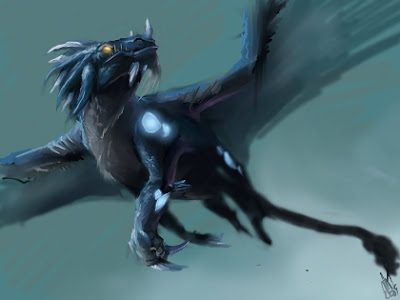 Malygos is the Aspect of the blue dragonflight and one of the most ancient creatures living on Azeroth, and one of only a handful who were alive at the time the Titans departed. Norgannon, the Titan master-magician and keeper of lore, granted Malygos a portion of his vast power. From then on, Malygos would be known as the Spell-weaver, the guardian of magic and hidden arcanum. Malygos is a leviathan with small wings. His body is covered with crystalline scales of pure azure. His body shines with shifting colors that change constantly from blue to silver. Theoretically, since he and his children specialize in magic it is likely that their powers far exceed those of the other dragon flights since magic is the element they rule. Now that he has regained his sanity, he is once again taking an active role in the protection of the world. Malygos began a terrible war to purge the world of "rogue" magic users, including the Kirin Tor of Dalaran. Realizing the situation had grown out of hand, Alexstrasza rallied the remaining dragonflights in the Wyrmrest Accord to combat Malygos' genocidal crusade. After much conflict around the Nexus, heroes entered Malygos' inner sanctum with the aid of the red dragonflight and defeated him, ending the war and depriving magic of its appointed guardian at a crucial turning point. 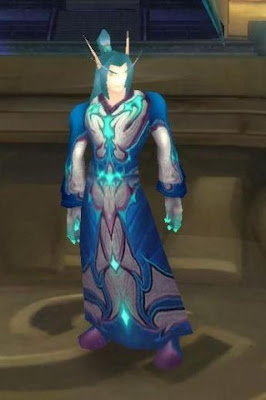 Malygos, Lord of Magic, is said to have created magic and spells. His command of magic is quite impressive, rivaling that of a demigod, although he does not aspire to such power. While physically he is not as powerful as some of the other Aspects, Malygos counters this disadvantage with his phenomenal command of magic.

Before the War of the Ancients, Malygos was described to often appear with an amused expression on his face. While physically dragons cannot smile, it appeared he often walked around with a smirk. He is said to have had a sense of humour and an optimistic personality, enjoying using magic and illusions to entertain audiences.

Like most of his kind, Malygos is a solitary creature who avoids contact with others. He dwells in Northrend, in a lair filled with some of the greatest magical artifacts known to exist. He spends his days studying magic, refining his abilities, and studying the various planes of the multiverse both remotely and in person, while his few remaining children scour the world for ancient artifacts and repositories of arcane power.

Malygos does not seek out combat; and although he and his dragonflight are still routinely hunted by black dragons, he avoids their kind if at all possible. He protects his lair and himself with illusions and misdirection. Those who discover his home are encouraged to depart through a variety of means; Malygos takes direct action only as a last resort. When he does fight, he engages spellcasters first, using his breath weapon and other abilities to sweep spells from their minds.
Posted by bluedreamer27 at 7:49 PM