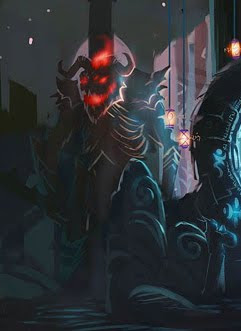 One of the primary lieutenants of the Burning Legion during the time of the War of the Ancients, Hakkar the Houndmaster was the first member of the Legion to set foot upon Azeroth. He was sent through the portal created from the Well of Eternity to assist Xavius in strengthening the portal, preparing for the rest of the Burning Legion to come forth. Hakkar's primary weapon was a whip which, besides traditional use, could be used to summon a seemingly limitless supply of felhounds to do Hakkar's bidding. Hakkar attempted to remove Krasus and Malfurion from the resistance, but quick intervention by the Sisters of Elune saved the wayward pair. Hakkar inflicted fatal damage upon the High Priestess of Suramar and was about to murder Tyrande when Malfurion Stormrage stepped in to prevent his love from being destroyed, calling down a fierce lightning storm to vanquish the Houndmaster. Baelmon the Hound-Master is presumably his successor. He is described as a huge skeletal knight, with a horned skull.
In the original timeline, Hakkar survived the War of the Ancients and was killed during the Third War. When the Old Gods warped time and space in an effort to escape their prison, the timeline was altered in a variety of ways, among them Nozdormu's efforts to stop them, which in turn altered the course (though not the outcome) of the War of the Ancients. Hakkar's death at the hand of Malfurion Stormrage was one result of this, signifying that the old timeline was being overwritten, not relived.
Posted by bluedreamer27 at 6:12 PM