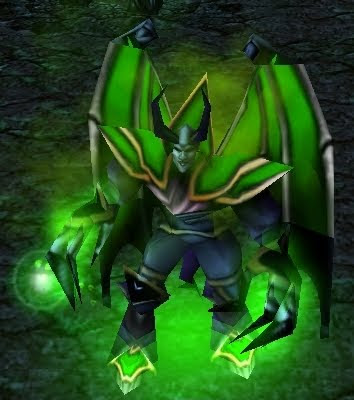 The dreadlord of the Nathrezim, Detheroc, and his two brothers, Balnazzar and Varimathras, were left to watch over the Legion's holdings in Lordaeron when Archimonde and the main force of the Legion left for Kalimdor to deal with the fleeing orcs and humans, as well as the night elves who had defeated them in ages past.
In the aftermath of the Third War Detheroc began to notice that much time had passed without hearing a word from Archimonde. One day, Arthas stormed into the palace and informed them that their Legion was defeated, and that their deaths would seal that fate. They were able to flee before he could strike. Hiding in Tirisfal Glades, they coerced Sylvanas into assisting them, and planned a coup to take back Lordaeron and rule the newly coined Plaguelands. Detheroc and his brothers assumed control of the Capital City and ambushed Arthas, but the resilient Death Knight battled his way through their forces and fled across the sea, to his master in Northrend.

With Arthas gone, Detheroc and the other Dreadlords could concentrate their power in Lordaeron. When Varimathras asked Sylvanas to join their new order, she refused, butchered his forces, and turned him to her own side. Detheroc was not so easily defeated. He used his powers of domination to control the human general, Garithos, and when Sylvanas launched her next attack upon him, he turned Garithos and his forces loose on her. Now with Varimathras at her side, Sylvanas managed to keep Garithos at bay as she stormed into Detheroc's base and "tore him to bloody shreds" as Sylvanas put it.